Malta Boxing Association, MBA, is sanctioning an event at Hilton, St Julians, on the 30th March 2022. A co-promotion between Noel Mercieca and Kamran Kabinejad.

The fightcard is filled up with quality boxers from Sweden. Niclas Elfstedt has convinced his friends in Sweden to come and box in Malta. Beside Niclas we find Pezhman Seifkhani, so it will definitely be an event with great fights.

After the Covid 19 situation boxing events starting slowly up again, with limited audience and like on 31.07.2020 at Monte Kristo in Luqa, Malta as an open-air event. In the ring we will see the strong light heavyweight fighter from Libya living in Malta „The Trigger“ Malik Zinad.

Beside Malik will even his younger brother Moez Zinad make his 3rd professional fight.

The Swedish boxer Clarence Goyeram is now living in Malta, like Niclas Elfstedt, and even Clarence will take part on this event.

On the ladies side we find Claire Sammut (Claire Ciantar) entering the ring as well.

Good boxers on the event arranged by Malik Zinad and Charles Muscat on the 31.07.2020. If you´re in Malta, don´t miss it!

The event will be broadcasted on Libyan TV and an online-stream, wasat.tv.

Main fight will be a WBF International title fight with Christian „Coqqos“ Schembri vs Christian Arvelo.

Super Steve Martin will not be missing, he is fighting a 8 round bout vs Francesco Lezzi.

An event you should not miss!

Prize Boxing Promotion are taking next step with Super-Steve on the 30.09.2017. Steve Martin will fight a 10 rouds bout vs Antonio Santoro. A fight in welterweight.

Haithem Laamouz will be on a 8 rounds bout vs Mohamed Khalladi. Khalladi is born in Tunisia, now living in Italy, has fought 14 bouts, won 8 and 5 on KO.

Christian Schembri will fight 8 rounds in super middleweight vs Alessandro Ruggiero. „Coqqos“ started his career fighting Scott Dixon and after that close fight he won the rematch. Scott got so upset about his lose that he refused the doping test, which lead to the consequences that the Maltese Doping Authorities suspended Dixon for four years. He is suspended until 2020.

The shooting star The Bullet, Kerstin Brown, will even fight on 30.9. His opponent will be Yuri Sampirisi. In Ukraine Kerstin Brown fought Ihur Magorin, a very experienced boxer with a lot of amateur bouts in his career.

A great female boxing fight we have to enjoy with Diane Schembri vs Claire Ciantar.

It is a real great fightcaad, MBA, Malta Boxing Association, is sanctioning.

On his 8 bout did the judges in Malta not have much to do. Malik Zinad, The Trigger, attacked his Bosnian opponent Aleksandar Kuvac at the Saturday Night Fever Boxing Event of Prize Boxing Pomotions, sanctioned of MBA, Malta Boxing Association in Paola, Malta.

Kuvac arrived unfortunately without his own team, so the blue corner were not use to the boxing style of Kuvac. Malik attacked his opponent and he got counted, the fight continues and Malik goes on and Kuvac makes him small, a way he usually does, to avoid the shuts.  The corner find the fight too dominating of Trigger and thinks of the health of their sportsman and threw the towel. Win after 1:08 minutes in the first round, TKO win to Malik. His record is now 8(7)-0-0.

Zinad is aiming the German Champion Elvis Hetemi. This would be a thrilling fight. Both managers are interested of this fight. That is what we are looking forward to!

The talented Libyan light heavyweight boxer from Malta Malik Zinad is on a training camp in Hamburg. Zinad, licensed from MBA, Malta Boxing Association, will be fighting vs Beka Aduashvili on the 18.12.2016 in Bielefeld, Germany. 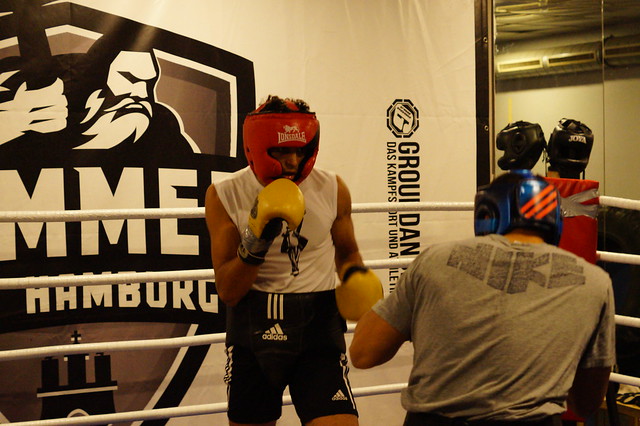 Duncan Calleja from Malta is going to fight in Italy tonight, Sunday October 30. His opponent is Mirko Geografo, 7-1-3, and the bout is in super welterweight over 6 rounds.

Christian Schembri alias Coqqos will enter the ring at the 17.09.2016 in Aria Complex, San Gwann, Malta. Schembri started his professional career with a fight against the very experienced Scott Dixon. He impressed in this bout of 12 rounds to make it hard for Scott Dixon. On the 11.03.2016 he got his rematch. The bout of 10 rounds Christian Schembri had raised his performance and won on a split decision, SD, against Dixon. Dixon was not active in the bout, but got that upset of his loss that he refused to do the doping test. The refuse was reported to NADO, who will decide about suspension. MBA had no either choise as to report a temporary suspension. Scott Dixon is still suspended. Further news from NADO coming soon.

At the event in San Gwann will Steve Super Martin fight against Aaron Thomas.

The event is sanctioned of MBA, Malta Boxing Association.