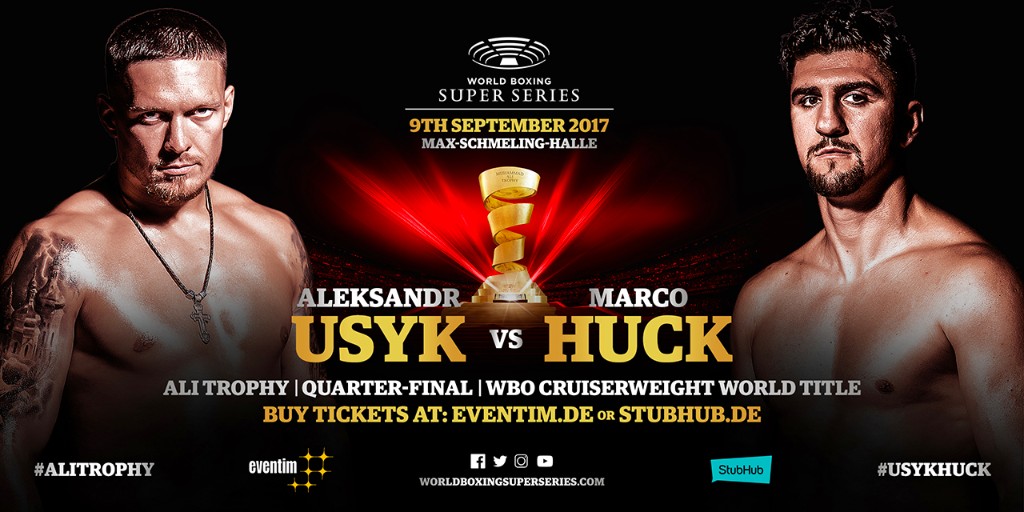 The first contest of the World Boxing Super Series will be the cruiserweight quarter-final between WBO World Champion Oleksandr Usyk (12-0, 10 KOs) and Marco Huck (40-4-1, 27 KOs) at the Max-Schmeling-Halle, Berlin on September 9th.

Number one seed in the 200lb (90.7 kg) bracket, Usyk, picked the experienced German fighter to be the third defence of his title at the Draft Gala in Monaco earlier this month.

The pair fittingly meet in the Max-Schmeling-Halle, Berlin. A venue named after the famous German Hall of Fame boxer who is fondly remembered for his rivalry with the legendary Joe Louis.

30-year-old Usyk, who took Gold at heavyweight at the 2012 Olympic Games in London, will have been reigning WBO World Champion for almost a full year when he enters the ring in Berlin having won the belt in Gdansk last September. That time the Ukrainian beat the incumbent, Krzysztof Glowacki, by unanimous decision, handing the Polish fighter his first defeat as a professional.

The 6’3“ (190.5cm) southpaw has since defended his belt twice, both times in America, knocking-out Thabiso Mchunu in December and winning a unanimous decision against Michael Hunter, another unbeaten fighter, 3 months ago.

„I can’t wait for the start of the tournament,“ said Usyk. „I miss the ring and look forward to hearing the opening bell ring again. At the moment I am not thinking of my opponent. I am concentrated on my preparation, I’ve got many things to do in my training camp. If he wishes, he may think about me.“

„I have seen that I am the favourite,“ he continued. „I am confident in what I am doing at the moment. Once the first round begins I will start doing my job. I will box with passion and devotion.“

32-year-old Huck, who made his pro debut almost a decade before Usyk, lost last time out against another World Boxing Super Series entrant Mairis Briedis. But he is confident that he can get back to winning ways against the Ukrainian, especially as he fights on home ground.

„I am very excited that I am meeting the so-called favourite for the tournament already in the first fight,“ said Huck. „This will definitely be a fight that no fan should miss. I have won world titles and defended them many times, but the Muhammad Ali Trophy is unique, I would love to win it.“

Roberto Dalmiglio, Comosa´s Head of Management Board, is looking forward to the World Boxing Super Series kicking-off on September 9th. „The first fight of the tournament will be staged in one of the most famous and influential cities in Europe in one of the most important boxing markets. Two great champions and the first glimpse of one of the favourites – in such renowned venue. The experience and the quality of Huck will offer a top fight of unprecedented quality delivered by the World Boxing Super Series.“

Comosa’s Chief Boxing Officer, Kalle Sauerland is predicting an exciting bout in Berlin. „I believe that the fans in are in for an electrifying opener to the World Boxing Super Series and 8 consecutive weekends of action. I genuinely felt electricity between the pair, I think Huck really wanted Usyk to pick him and the way they faced off on the stage in Monaco it was a sign of things to come. I’m not sure the judges will be needed in this one.