Swedish TV broadcast about Klara Svensson on her preparation for the big title fight of WBC:

Boxing out of London’s famous Dale Youth Amateur Boxing Club, which amongst others has produced Commonwealth Super-Middleweight Champion George Groves and European Super-Middleweight Champion & Olympic gold medalist James DeGale, Jumah has already amassed an impressive amateur record (22-1, 13 KOs). “At this stage of his career he is as good as anyone I have ever trained, including Groves and DeGale,“ said Mick Delaney, Head Coach at Dale Youth A.B.C. “He has got everything going for him and can definitely go a long way.“

Having spurned the advances of a number of British promoters, Jumah has opted to sign with Team Sauerland. “I met Nisse Sauerland in London and we got on really well,“ said the 23-year-old. “I grew up watching Sauerland fights. As a cruiserweight I always followed boxing on the European scene as the division is stronger there than in the UK or US. It is an honour to think that I can now be a part of that.“

The powerful southpaw is relishing the unique opportunity he will be given at Team Sauerland. “A lot of fighters do not get the chance to travel until later in their career and it can come as a shock to their system,“ said Jumah. “From the beginning of my career I will be fighting all over the world and at home in the UK. I will be gaining valuable experience which will help me become a worldwide star.“

Jumah remains unfazed by the prospect of turning professional. “I think my style is more suited to professional boxing,“ he remarked. “I enjoy big crowds and a big ring. Even as an amateur I always went for the big shots and stoppages. I love fighting, this is who I am and this is what I am made to do.“

Promoter Nisse Sauerland has no doubts over Jumah’s ability. “We hit it off from the moment we met and as soon as I saw him fight in the ABAs I knew he could go all the way,“ said Sauerland. “I aim to keep him as busy as possible over the next few years and have him fighting all over the world. Deion is a promoter’s dream and I am sure we are looking at a future world champion.“

Jumah is set to make his professional debut on February 9 as part of Team Sauerland’s Nordic Fight Night series at Blue Water Dokken in Esbjerg, Denmark. In the main event of the evening, 21-year-old Danish star Patrick Nielsen (17-0, 8 KOs) will make the third defence of his WBA Intercontinental Middleweight Title. Tickets for the show are available at billetten.dk. 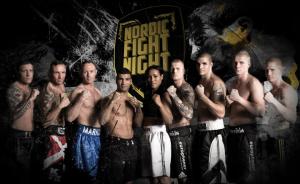 Dennis Ceylan will fight again at 09.02.2013 in Esbjerg. Anyway Patrick Nielsen will get into the ring and so even Andreas Evensen at Nordic Fight Night in Esbjerg.

New opponent for Erik Skoglund at 22.09.2012 in Frederikshavn 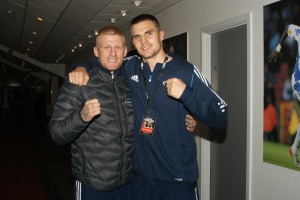 Skoglund to face Maslov in Frederikshavn on September 22

Unbeaten Swedish sensation Erik Skoglund (11-0, 6 KOs) will take on Ivan “Big Heart” Maslov (7-10-1) at the Nordic Fight Night in Frederikshavn on September 22. The 27-year-old Russian replaces Argentinian Ricardo Ramallo, the initial opponent. “I don´t care who my opponent is,” Skoglund said. “I am a professional so I am prepared to fight and beat anybody at any time. The training in Berlin has gone really well, I´m in great shape. I am travelling to Frederikshavn to clinch my 12th victory.”

Tickets are available at http://www.arenanord.dk.

Sauerland boxers gearing up for war in Frederikshavn

On September 22 the Nordic Fight Night returns to the Arena Nord in Frederikshavn. Stepping into the ring are Cecilia Braekhus (20-0, 5 Kos), who will be defending her WBC/WBA and

WBO Welterweight Titles, Patrick Nielsen (15-0, 8 KOs) who is putting his WBA Intercontinental Middleweight Belt on the line and Erik Skoglund (11-0, 6 KOs) who is looking to keep his perfect record alive. Also on the card: Torben Keller (4-0-1, 1 KO) and Ahmad Kaddour (25-2, 10 KOs). Both train alongside Nielsen and Skoglund at the same gym in Berlin, Germany, and are being coached by Torsten Schmitz.
All of them are currently in intense preparations for their upcoming fights and are itching to get back into the ring after a summer break.

Braekhus is currently preparing for her strongest opponent to date, Anne Sophie Mathis (26-2, 22 KOs) from France. “Mathis will be the toughest challenge yet,” said the world champion. “She really is a knock-out queen and I will have to be extremely careful.” Although Mathis´ record speaks for itself and would probably cause most boxers sleepless nights, Braekhus is very confident in herself as well as her coach Ulli Wegner. “My training is going very well,” according to Braekhus. “The training camp in Kienbaum was good and we are already leaving for the next camp this Friday. My coach knows exactly what he is doing and we are completely dedicated to the task of defending my titles. There is no way I can lose with him on my side.”

Also getting back into the ring on September 22 are Patrick Nielsen and Erik Skoglund, both under the supervision of coach Karsten Roewer. And coach Roewer does not hold back his excitement when speaking about the strengths of these two promising youngsters. “They both are in great shape,” said the coach. “Patrick was with me in the USA and did really well over there and Eric did exactly what I asked him to do while I was gone. So I could not be happier.” One attribute he is particularly impressed with is the strength and power the two Scandinavians possess. “Patrick is always really aggressive in the ring and is always looking for a knock-out,” according to Roewer. “Eric has one of the strongest punches I have ever felt. He also has an ‘In your face’ attitude when he is inside the ring. But since he got injured during his fight against Volodymyr Borowskyy in Neubrandenburg in May 2011, he has learnt to contain himself a little bit more when it is necessary.”

It seems like Jose Yebes (11-2-1, 5 KOs), who takes on Nielsen, and Ricardo Marcello Ramallo (10-3, 9 KOs), Skoglunds opponent, will definitely have their work cut out for them when they meet in Frederikshavn on September 22.

The fans in Denmark will also be looking forward to see the two Norwegian prospects Simen Smaadal (2-0, 1 KO) and Alexander Hagen (pro debut) inside the ring at the Arena Nord.

Patrick Nielsen vs Jose Yebes at 22.09.2012 in Frederikshavn, Denmark

ose Yebes in Frederikshavn. The undefeated 21-year-old has nothing but good memories of Arena Nord, having knocked out Gaston Vega in April in his biggest fight to date. “That was quite a spectacular evening,” Nielsen said. “Vega refused to go down and kept coming at me but I eventually got him. Everybody who wants to take my title away from me will get punished. The next one in line to make this experience is Yebes. He´ll go down for sure as I plan to give the fans in Frederikshavn another night to remember.”Yebes, 32, boasts a record of 11 victories (5 KOs), 2 losses and 1 draw, while Nielsen has won all 15 of his fights as a professional. Together with his coach Karsten Rower as well as training partners Edmund Gerber and Tyron Zeuge, he is currently shaping up in the United States. They are visiting several gyms in New York and Philadelphia to learn more about the American boxing culture. “It´s great to get out of Berlin and do something other than work-outs in our gym,” Nielsen said. “We´ve been in some pretty rough gyms over here and got some very good training. It´s a fantastic experience.”Promoter Nisse Sauerland is pleased with the path Nielsen´s career has taken. “Patrick has developed very well,” Sauerland said. “In less than six months, he became IBF Youth Champion, scored a flash KO in front of his home fans and won the prestigious WBA Intercontinental Title. He is already ranked in the ninth spot by the WBA and if he gets past Yebes, which I fully expect him to do, he will have a lot of exciting options. But first things first – Yebes will be a tough test.”

Tickets for the Nordic Fight Night are available at www.arenanord.dk. Also on the card will be the women´s fight of the year, WBA / WBC / WBO Female Welterweight Champion Cecilia Braekhus versus French KO queen Anne Sophie Mathis. More bouts will be announced shortly.

Read even about trainingscamp for Patrick:  http://leifpm.com/2012/08/07/trainingcamp-in-usa-for-patrick-nielsen-edmund-gerber-and-tyron-zeuge/ 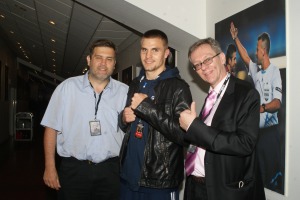 At Nordic Fight Night in Frederikshavn at the 22.09.2012 will the next opponent to meet unbeaten Erik Skoglund be Ricardo Marcello Ramallo. The argentinian „El Rayo“, 9(8)-3(1)-0, is ranked 99 in  super middleweight.

Rising Swedish light-heavyweight Erik Skoglund (11-0, 6 KOs) will return to the ring on September 22 at the Nordic Fight Night in Frederikshavn, taking on Argentinian Ricardo Marcello Ramallo (9-3, 8 KOs). The unbeaten 21-year-old comes off a second-round KO win over Fouad Nasri in Herning, which already was his fourth victory in 2012 and his fifth ever since beating Volodymyr Borovskyy despite a broken jaw in May 2011. “Things have been going very well as of late,” Skoglund said. “I have knocked out three of my last four opponents. I can feel that I get better and stronger with every fight I take.”

Skoglund has spent the summer break in his hometown of Nyköping. “After my last fight, I took two weeks off and then started with practice again. Right now I am working out twice a day according to a very strict plan I got from my coach Karsten Rower. It´s a nice change to go back to my old gym and do the running exercises at the beach, even though the training is very tough and I push myself hard. I´ll go back to Berlin on August 19 to do the fine-tuning and the sparring.”

Skoglund needs to be in top shape on September 22. Ricardo Marcello Ramallo has clinched eight of his nine victories by the way of knock-out. “He seems to be a good puncher but I am sure I have a lot more power than he has,” Skoglund said. “We will ultimately find out on September 22.”

Tickets for the Nordic Fight Night at Arena Nord are available at www.arenanord.dk. In one of the main fights of the evening, WBA / WBC / WBO Female Welterweight Champion Cecilia Braekhus will defend her titles against French KO queen Anne Sophie Mathis. Further fights will be announced shortly.

Cecilia Braekhus vs Anne Sophie Mathis am 22.09.2012 in Frederikshavn?

BE A FOLLOWER OF THIS BLOG!