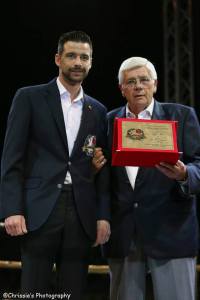 Prize Boxing Promotion´s show Rumble in the Med 10th edition sanctioned by MBA and sponsored by Eat Me I’m Famous gave the president of EBU Mr Bob Logist the prove that boxing has came to Malta for to stay.  The shows between the bouts with young boxers make sure that the future will be secured with upcoming boxers.
Impressive performance from Christian Schembri who’s told to turn pro as soon as possible.  Schembri fought his fight which showed Christian just keeping going on.  A high work-rate and it was very close to a KO-victory.

Best fight of the night was Keith Azzopardi vs the British boxer Charles Aristide.
Both boxers made a clean and close fight.  Finally the judges had to score and find out a winner of each round.  Not so easy in this fight.  Only thing missing in this fantastic fight would be more rounds with these two great fighters. It was the best fight Keith Azzopardi ever made. It´s time for these quality boxers to turn pro.
Young prospect Kerstin Brown fought like a rocket.  Won his fight clearly. See video.

Mike Carter is a good sportsman and the audience could understand why his nickname is The Hurricane. The bout ended as a draw.

Pete Stoten from UK won the PBP International Semi-Pro title. Stoten can be proud of his performance. Malta seems to be a good place for Pete Stoten as he won before in Malta. To win the title is even more impressing.

The professional bouts did Super Steven and Tyrone Borg deliver. Both fights ended before the last round.

The Hungarian boxer Szakallas made his comeback since 2003. Steve Martin was too hard boxer to restart his late career As an accidental head butt happened in the 4th round did Szakallas point out his problem to continue in the 5th round. So he gave up and refused continuing boxing and lost the fight on TKO  It´s a pity he´s missing his will to fight.  In the bout he jumped up and down with his head so it wasn’t wondering that such an accident happened. Steve Martin was not happy about his victory as he would like to show his boxing talent. Hopefully he will soon get the opportunity with the EBU members to go abroad and get fights. As MBA now is a member of EBU it makes it easier to happen.
Even Tyrone Borg was not so happy about his short fight orignally stated for 8 rounds. In the 2nd round he knocked down his opponent three times. Tyrone has an impressive punch.

The very long night´s last fight did Richard Vella make a Mike Tyson bout time. After 53 seconds he had destroyed his opponent. A fantastic fight. This fight will make Richard opportunities to turn pro and fight abroad.

Lydon Chircop, Garht Galea and Duncan Calleja made excellent work in the ring, too.

Time to buy tickets for the event „Home of Champions“

Prixe Boxing Promotions last event was sold out two weeks before the fight night. We highly recommend you to buy the tickets as soon as possible, as we count with a sell-out three weeks before the event at 14.03.2014!!!!